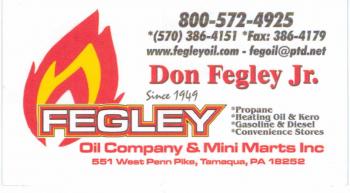 Thursday Nov. 16th, the officers and members prepared retired engine 784 to leave South Ward. She was purchased by a private individual in Virginia. Retired engine 784 served us and the borough of Tam...
➜
West Penn fire Co new KME

The officers and members would like to congratulate the West Penn Fire Co on the arrival of their new KME!!!!
New Engine

On October 22~ 1913, a meeting of the south ward citizens was held for the purpose of organizing a fire company. The following were elected temporary officers. 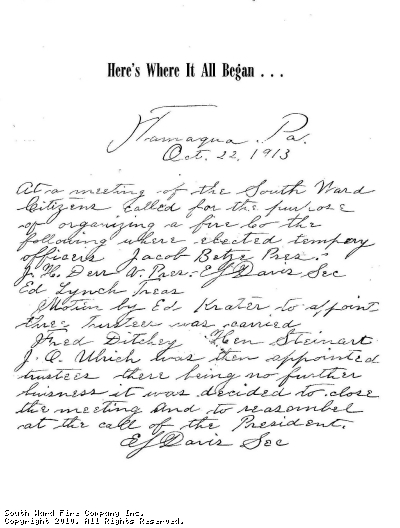 Meetings were held at Lynch’s Hotel and Fred Ditchey’s until August 1915. Then, The Company rented the office of the Vulcan Iron Works. 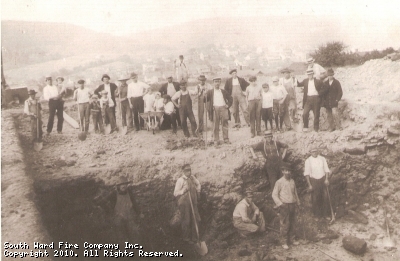 In 1916, a lot was purchased, and The Company built a Fire House on the corner of Swatara and Van Gelder Street. The two story wood frame building contained social quarters in the basement. The engine room was on the ground floor and the stage and hall was on the second floor. 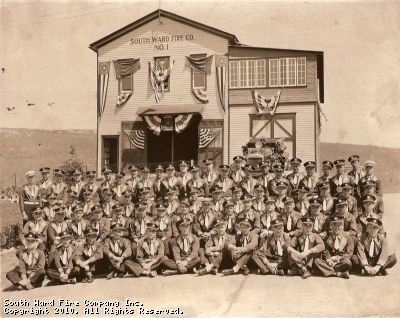 In 1923 Harry “Honey” Miller was hired as the club steward. A position he held until his death in1946. Honey Miller was instrumental in the early years of the South Ward Fire Company. When he died, the Company received thirty thousand dollars, which was used for construction of a new building. The new building was built on the original foundation of the old building. The engine room was moved to the rear of the building, which required removal of solid rock. The work was done by members who worked in local mined and had experience in drilling and blasting rock.

The masonry work was completed by Yellow Weston. All the steel beams were set in place by members using manual labor. Most of the finished work on the building was also completed by members.

The building boasted a fifty-two foot long bar, a large social hail and a kitchen. It also was equipped with central air, somewhat uncommon for 1951.

The Company’s first piece of equipment was a hand drawn chemical wagon, which carried four-hundred feet of hose. The first fire truck purchased was a 1921 Hahn Pumper. In 1931 a Buffalo 500 pumper was purchased to replace the Hahn. A new federal Pumper was added to the company in 1954. In 1968, the Buffalo was sold and replaced by a Hahn 750 Gallon Pumper. In 1981, the federal was sold to J.E. Morgan and replaced by a 1981 Mack Pumper, at the cost of eighty-one thousand dollars. The 1968 Hahn was replaced with a 1971 Mack Pumper, purchased from the American Fire Co. of Lansford. The ‘71 Mack was sold and replaced by a new 1995 1250 gallon KME Pumper. This is our current first response vehicle. The 1981 Mack was sold to a fire company in St. Clair. 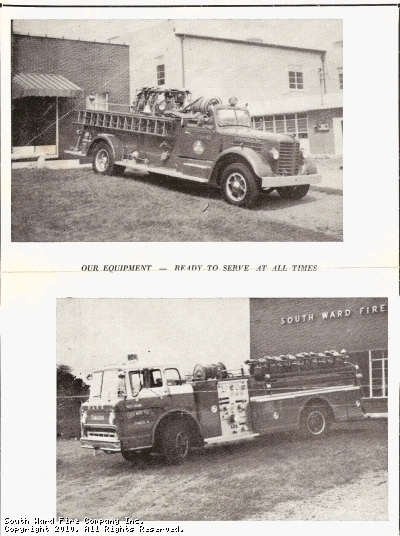 In 1988, our original engine room was deemed too small to house our equipment. It was decided to build a new three bay garage on the western end of the property. The new building was occupied in 1989, giving us much need space.

With a decline in the social quarter business, and the construction of Lehigh Carbon Community College, the Company decided to sell our brick building to the college. It was completely remodeled and is now the Jane Scheeler Center of LCCC.

The Sale of the building allowed the company to expand our engine room to six bays. We also have a day room, bunk room, communications room and office space.

In our 97 years, we’ve built three new buildings, always maintaining the most modern equipment for fire fighting. We’ve always changed and adapted to the times, ensuring we will be around for many more years to serve the People of Tamaqua. 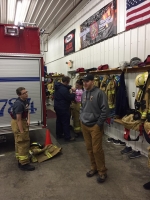 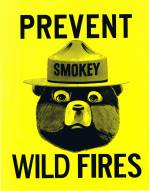 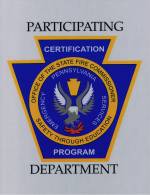 This site has been viewed 158,541 times.
Calls
News
Events
Pictures
Apparatus
Maintained by the members and staff of South Ward Fire Company Inc.. Designated trademarks and brands are the property of their respective owners. Copyright © 2006-2022. YourFirstDue Inc. All Rights Reserved. Content on this web site is supplied by South Ward Fire Company Inc.. YourFirstDue Inc. cannot be held responsible or liable for any content, text, pictures, or any other media found on this web site.
Management login
Powered by